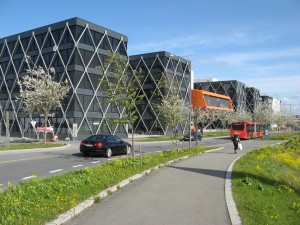 Over 40 existing and potential Nornet users gathered at the first Nornet user workshop at Simula on September 18-19. The majority of participants came from Norway, but also from Sweden, Germany, Belgium, China and the US.

The first day of the workshop gave an introduction to Nornet and to selected research projects that is or will be using Nornet as an experimental platform. Thomas Dreibholz gave an overview of Nornet Core, while Džiugas Baltrūnas introduced Nornet Edge. The latter included a presentation of the visualization website, where you can follow the data gathered on Nornet Edge in real time. Several researchers presented relevant projects, and Professor Erwin Rathgeb from University of Duisburg-Essen could present the first results gathered from the Nornet Core platform. His project uses Nornet to gather data about attacks on SIP servers.

The second day was mostly dedicated to tutorials, where participants could get hands-on experience in using Nornet, and discuss different use cases directly with the Nornet developers.

The workshop resulted in plans for several experiments that will be set up in the Nornet infrastructure over the coming months. Several participants also expressed an interest in setting up Nornet sites at their home institutions. More international sites will let Nornet cover a wider range of networks and link characteristics, which will further improve the realism of experiments.

Given the large interest and positive feedback the workshop received, it is very likely that a similar workshop will be repeated in the future.